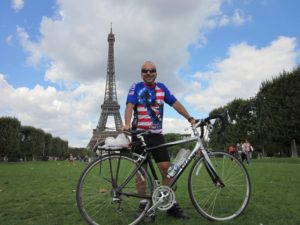 Anthony Arno successfully bicycled across America as a college student with the support of Calvin Klein while drawing attention towards the plight of cancer patients.  After college,  Arno worked as a social worker with disabled adults.

Arno began his teaching career in Brooklyn at P.S. 238 and has received many awards and grants, including being named a 2003 Fulbright Memorial Fund recipient to Japan, participating in an Earthwatch study of the endangered owl in the Sierra-Nevada region of California, participation in NASA’s Space Camp, and presenting at the annual NJEA Conference.

In the 1990’s Arno used the schools only computer connected to the Internet to learn about historic Route 66 while his students bicycled 2000 miles aboard an exercise bicycle in the back of the classroom. During the year long teaching journey students corresponded with people living and working along the famed highway, including Chicago Mayor Daley and the songwriter Bobby Troup, who wrote the famous tune for Nat King Cole in 1946.

Since the Route 66 experience,  Arno hosts a radio show highlighting the storied life of Route 66.  Guests include cast members from the animated Pixar-Disney classic CARS talking about the research of creating a movie highlighting Route 66, a German POW camp in Oklahoma that allowed the prisoners to work in the community to assist the local economy, and most recently the mayor of Times Beach, a once thriving community of 2,000 residents that was completely purged after dioxin was unknowingly sprayed on the dirt roads to suppress the dust.  To date, the town is the largest Superfund site in American history, having spent over $200 million during the 1980’s for a clean up.  Every home, every government vehicle, and even the water tower has been buried into a specially created vault the size of four football fields.

Most recently, Arno has launched a second Internet radio program for educators that peaked on iTunes at #2 upon release featuring talks with nationally recognized teachers.  A recent guest was former educator June Scobee Rogers, widow of Challenger Space Shuttle Commander Dick Scobee.  June talks candidly with Arno about being raised by a mentally ill mother,  marrying at the age of 16 so that she could raise her younger brothers, working with Teacher in Space Christa McAuliffe,  and life after Challenger, where she has created a network of space education centers that has benefited over 4 million children since the Challenger accident 30 years ago.